Budapest was trip intended for drink, and drink we certainly did whilst we were out there. I gained about two stone just in beer alone. Budapest is particularly well known for its RUIN BARS.

We made sure that we went to plenty of them whilst we were staying. 8 Ruin bars to be correct, thats nearly 1 a day!

So our first stop as we ventured into Budapest centre for the first time was a place called Baross Sport. I think at this point we just wanted to find somewhere that wasn’t Mcdonald’s that would sell us a panini and a pint. We were successful at Baross, its not exactly somewhere I would hype and rave about how great it is but it was perfect for what we needed, a quick snack, nothing special and a pint, THE FIRST PINT OF THE

HOLIDAY THOUGHT. So shout out to Baross Sport nearby the train station for supplying us with our first pint of many, the rest of the day we proceeded to get very drunk.

From Baross we moved onto a place called Pub 7. We sat outside alongside the path and I enjoyed possibly one of the best cocktails I’ve ever tasted (which is insulting for Brad as he is a mixologist but we can let it slide). It was nice and reasonably priced, only downside was it being beside a main road. Other than that I would recommend for a brief pit stop for sure!

NOW we found the ruin bar I’d been suggested that we go to before we got to Buda by complete accident. We were just walking along the streets and saw the entry to Szimpla Kert. Hands down one of the coolest ruin bars we went too (minus Instant but we shall get to that). It had multiple different rooms, one being a small quirky trinket shop, one being a seating area with TV’s all over the room and fairy lights, there was graffiti all over the bathrooms of people who have come and gone and a huge bar and separate wine bar! 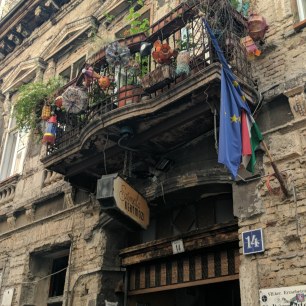 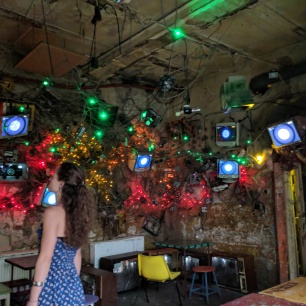 Another seating area out the back and then if you venture upstairs you can eat during the day and in the night it becomes an extended addition to the bar! Totally awesome place with a great vibes as well, the drinks are at a good price too, good music and a small dance floor even at the back completely hidden away, it was a great place and we went back a couple of times when we went out because the ruin bars are just so enjoyable. They’re also full of tourists, of course, so its good to mingle as well!

The following day on our adventures we wandered right to the Chain bridge and the centre of Budapest, rather parched we decided to go for a drink in a waterside bar called Raqpart. It was situated right on the Danube with dec chairs down by the edge of the water if you wanted to sit by the Danube. The veranda itself was covered but open so you could still enjoy the weather and a drink, it was a really stylish place and probably pops off in the night time. It also serves food as well but we weren’t there to eat. Again really reasonably priced, nothing too extortionate!

Another Ruin Bar for your lists is Udverrom 21. This one was just as funky looking as Szimpla but not as large! We stopped in here for a pint after another busy day sightseeing and it was really sweet. It was long in length and above the bar area were stairs to another smoking area. Naturally I wanted to head up there, sorry boys, so the decision was made. Although it was also surrounded but hostel bedrooms it was open air meaning we could smoke in the ruin bar as well!

Ruin bar number 3 is Fuge Udvar & Play, cheap drinks and more music and games! This one was also really long and thin and whilst we were there there was also a pub crawl so we were able to make a friend or two again whilst we were there! Although the toilets here were something out of a horror movie, shall not forget that! 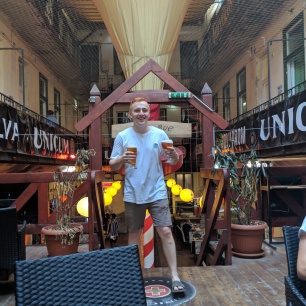 Doboz was the funkiest ruin bar to get into, two huge floor to ceiling metal doors and a bloke out the front. I don’t know how much entry was because it was me and the 3 lads and they let me for free!? ladies get in free apparently, nothing like a good bit of sexism eh! As you walked through the doors there was a huge metal sculpture of a demon with red glowing eyes hugging the tree, its massive! Its a huge open space with some tables and a dance floor around the tree, its a really good atmosphere as well all themed Red and black for what I can only assume accommodates the demon on the tree!

Instant was the sHIT. It had an underground Techno bunker and a DnB room and then a main dance floor where one side was smoking and the other wasn’t and you had to pay 50p to have some toilet roll if you wanted to go, It was fucking awesome. We stayed out until 5am I’m pretty sure that night, it was amazing. Drinks were decent and the music was sick, and I even bumped into once of my old school friends in there, of all the places hey! He was also there for BudaFest with his friends which was sick. I ended up spending half the night in the techno bunker because it was just too good not too, a night to remember for sure, HIGHLY HIGHLY RECOMMEND.

Alcatraz Bar was an outside bar area nearby where we were staying, we had a couple of quiet drinks there as I think we were all very wounded from the night before. But determined to at least have a drink we sat in the summer warmth and had a couple of bevs, it wasn’t anything special but just really lovely to actually sit somewhere quiet for once.

Raktar Beach was a bar we found VERY unexpectedly. Situated almost as soon as you step foot on to Margaret Island, Budapest on your left hand side. We were drawn to this pub because we could hear the baseline from the street before we could see anything. It was about 2 in the afternoon at this point so we were intrigued and in need of a drink before exploring Margaret Island. We walked down into this white open bar where these lads where playing house and techno on a set of decks an that was that. Pretty sure we all had about 2-3 drinks each just enjoying the music and the sun before we went anywhere else. It was awesome.

Our next stop on our long walk back from Margaret island was a place called Publin, an IRISH PUB HOW OUTLANDISH, not. I bought some breadsticks and moaned about my feet as per usual. As its just your average Irish pub I certainly won’t be dwelling on this one but worth the visit if you just want a quick drink and some English.

Koleves Kert was a real cute ruin bar that Brad and I went too after date night and was shortly going by the boys after their visit to the casino! This was a my favourite bar as it was just so beautiful, it had hammocks and the tree’s were hanging between the seats and you had to beware the falling fresh fruit! It had a lovely atmosphere and was a really lovely place to drink.

Finally, we went to a bar called Kertem. A really beautiful park bar situated in the large community park where Budapest zoo can be found and the castle also! It had great music, there were DOGS EVERYWHERE. It was a dream come true, and the food was really really nice as well, it was a lovely place to relax as the sun went down!

Akvarium and Otkert are two of the main clubs/ruin bars as they are right in the centre of Buda! These were also the two clubs that BudaFEST was held at so I will go into detail in my Budapest posts instead about these places, trust me, they’re amazing and not one to miss.

So as you can tell, there was a lot of drinking this holiday.

I almost died and I salute the boys because they smashed it harder than I did and I thought I was dying.

So up next? BudaFEST! Where the fun REALLY starts.