So there is going to many many parts to this London Bucket list but I guess our first outing in London was the best place to start! I’ll be throwing in my trip to Wembley Stadium & the SSE Arena whilst Im at it too as it was a little before our first proper London outing!

So, You’ve found your way to the first part of My London Bucket list blog posts! I’ll be doing each trip into London and what we do from the bucket list on those trips!

Now before Brad and I headed into London for our first proper outing with our friend Mason, I had a Wembley Stadium Tour AND we were lucky enough to be able to go to an event in the SSE Arena as well in the Wembley/Brent area!

The Wembley Stadium tour was pretty awesome, I was lucky enough to get on the tour as part of my induction for my new work placement and It was pretty rad. With the tour being £15 each it was really fun! We started off heading into one of the tiers into the stadium, we were told loads of cool facts about the stadium, how many chairs and of course how many toilet where in the stadium. I’m not going to spoil it for you if you’re thinking of going but its a lot! haha! Then they take you through all the team’s quarters underneath the stadium, After walking down at least 10 flights of stairs we entered the team changing room and training roomS, physio rooms and finally the tunnel! The changing rooms all around the walls are football shirts with names on all around each room. The training room was really small but to have one in the stadium was pretty impressive itself.

Now the tunnel out into the stadium was pretty cool. As there was a large group of us on the tour we were split into two groups, almost like two teams, and walked side by side out of the tunnel like the footballers would and it was so much fun! We walked out onto the pitch and could sit on the chairs beside the tunnel for all the important people running the football teams. Talking about important people we also saw the royal areas! So where the queeny and all the royals sit during the games, and also where they have their meals before the game as well! Once we’d been shown around the entire ground we were taken and shown the artwork in the stadium which is made out of rubbish left by game goers once games are done! There were 3 animals and one being a lion which was made out of old team flags just left in the stadium, and made into art! Never heard or seen anything so useful or resourceful when it comes to tidying up and being inventive! Finally you can have a photograph with the cup and then you’re sent on through to the gift shop!

It lasts about 2 hours but is totally worth it,the entire thing is really fun, time flies and trust me you’ll definitely learn facts you never knew about at all! its pretty funky and I recommend it to anyone who has the chance to do a tour!

Another wonderful experience was an event in the SSE Arena next to the stadium as well. I’d managed to get two tickets to the Eubank Jr VS Abrahms fight that was taking place in the SSE Arena! Now I’ve never been into boxing nor have I really given it  a chance. But everyone at my work had also managed to get tickets so it was a really enjoyable group thing! And I knew Brad would enjoy it so of course I brought him along! I got to enjoy the experience with my man and my work friends so it was really good fun but as you can imagine drinks and food were expensive! 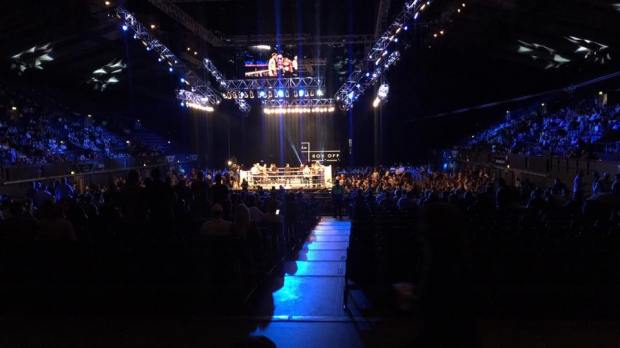 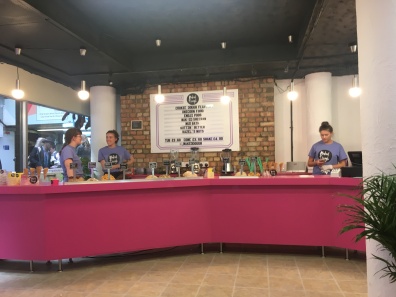 Now we’re onto when Brad and I met Mason in London to see a little bit of London itself! So we headed away from Camden where we met Mason and headed to Old Street station where we had every intention of going to the small shop in the Old Market underpass/station area called Naked Dough. Originally seen advertised on Facebook as a place that gives you pots of scoops of cookie dough, and that it does indeed. And it was heavenly. It was laid out just like an ice cream shop and there were just some benches along the back wall where you could sit. 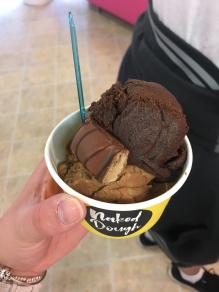 I just had normal cookie dough and then a scoop of chocolate chip cookie dough with a little Kinder Bueno on the side, Unfortunately I didn’t actually manage to finish my little 2 scoop pot as it was super duper sickly but it was another thing to cross of the list as I’d never been to a place like that before, and it was worth it being super yummy. It wasn’t that expensive either which was nice considering it was London, that and it was juat around the corner to the shop that only sold food with avocado in it?! one for all you avocado lovers there!

Once we had been to Old Street we went to The Shoreditch Boxpark! It consists of at least 20+ old shipping containers. The containers along the bottom were all things like vintage or hipster clothing shops! They were pretty cute, but one of them was a ball pit!! There were loads of cute little cafe’s inside these containers and upstairs the containers were full of different restaurants and places to get drinks! There were multiple seating area’s and it was a really cool place where you could just hang out in Shoreditch!

We also headed to Camden Lock! Now I’d never been to camden properly before so we got to have a proper look around some of the funky shops on the road and also the food market itself! It was a really photogenic area of course and it smelt amazing of all the different foods! There were also other aroma’s floating around and if you’ve ever been to camden I’m sure you’ll understand what Im on about!

The food market itself is huge and covers 2 area’s beside the canal/lock. Shops and other little quirky items are also sold on their stalls in the market around the food. Although we didn’t get to have a proper stalk downtime windy backstreets of the market we knew we would have a chance to have a look next time we came!

So we headed over the bridge  beside the lock which leads you the outside area of a whetherspoons and of course we had to have a quick drink to freshen ourselves up on our little look around.

Once we were nosing around Camden we headed to a large park area known as Primrose Hill. Primrose hill is beautiful because not only does the location feature in the programme I watch on Netflix Sense 8 Regularly, but Its genuinely in a lovely area and gives you a really nice view of London Skyline! It was really nice to visit an area in such a built up city that was spacious and where you could sit and just enjoy the view and the area itself!

Once we’d visited Primrose Hill it was time to head back to home after a pretty fun and tiring day, Mason had been the best tour guide as he has been living in London for a while before Brad and I so he was the best help in taking us and showing us all these places!

So the first part of completing some of the things on My London bucket list have begun! Heres to hoping you’ll join me for all the other parts as well 🙂