After being in Johannesburg for a few days we headed to Cape Town for the rest of our Holidays! we were in Cape Town for 4 days and we stayed in a hotel song Camps Bay! 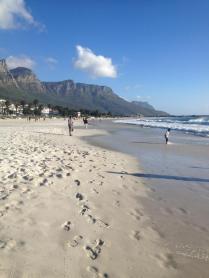 Now I really love the beach, so to be able to come out of our little villa for the 4 of us and be practically on the beach was wonderful, the only thing I’d forgotten to research was how cold the water would be. FYI, Its next level FREEZING. The weather wasn’t really beach material but It was still warm!

Because we were right on the beach front there was plenty of restaurants and bars along the front as well as some small little shops that sold touristy bits, the usual! One thing that was also awesome was the fact there was a little bit of surf but at the time I couldn’t surf to save my life so going wasn’t even an option, especially cause it was damn cold.

We went for a little wonder around the rocks at one of the beach and found this funky little walkway and water pool, so of course my sister and I went for a wonder along that to see how far out to see the pathway around the edges the pool would take us. Plot twist; not that far at all.

But during all of this the most breathtaking thing was that shadowing us in our villa and whenever we were out of the villa and on the front, a huge mountain was behind us! And it really was a wonderful sight. And too add to that wonderful sight was the sunset. Every night we could watch the sunset from our villa over the beach and disappear into the horizon, it really was wonderful and something I never thought Id be lucky enough to witness.

I think the only thing I could fault was the night club next to the hotel. I didn’t sleep. 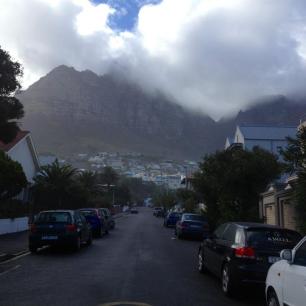 Once we’d settled into our Villa it was TIME TO DO TOURIST STUFF.

So, we visited Penguin Island, Table Mountain and Cape Point, Robben Island and Waterside Shopping Mall, and you’re about to read a little bit about all of them except Robben Island which I’ll cover in a separate post!

Once we were up there there were information points, benches and all these different viewing areas and it was incredible. It was like you were up in clouds, and technically we were! It was awfully windy which made it a bit chilly but Im certain nothing could have faltered the view and the general experience. It was wonderful to be so high up and be able to look over Cape Town in awe, I will never forget it. You could honestly see for miles and miles and look over the coastline too, it was some real natural beauty.

Cape point was another part of the trip that was just as phenomenal because of the view but also because of where we were. Cape point is a national world heritage site part of the Table Mountain national park! It sits on the cape peninsula and it usually pretty breezy and chilly but beautiful and v far to get too. 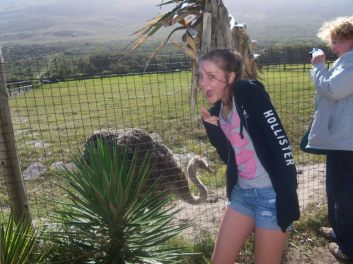 The drive to Cape Point was a barrel of fun, we were in a Mini Bus, and I think there was just us and one other family. It took us about 2 hours, We stopped on the way on the side of a road and for a short while I was like ‘Why are we stopping?’ UNTIL I saw that we had arrived next to an Emu/Ostrich Farm!! So of course we got out of the car to have a look at these funky birds especially as we could actually get quite close!

Upon arrival theres a large road/driveway I guess you can call it? It goes on for quite some time until you arrive at the car park and gift shop, and you can either take the funicular up to the point, or the stairs! Now typically because Yes I am LAZY. I wanted to take the funicular. I know, wheres the fun in that? But guess what, it wasn’t working on the day we went so I had no choice but to walk it anyway! And I’m actually really glad I did. 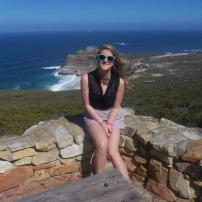 The views from the walk up were a lot better than I thought, way better. And because we walked up we could stopper photos and enjoy them more! When we were looking out at Cape Point bays I realised all these little pathways disappearing off into a different direction towards a cove and a beach, I didn’t get to investigate so one day when I go back I’m going to make sure I follow the pathway all the way around.

Once we arrived at the top INSTANTLY I loved the sign post showing how many miles away all the different locations around the world were. I LOVE things like this because It really puts into perspective just how far away from your usual norms you are and how you’re actually out there in this world exploring something thousands of miles away! It was a sunny but chilly day and like Table Mountain the views were something spectacular and not something I will ever forget, and hey my sister and I even got on for longer than 2 hours. Now that is a miracle. 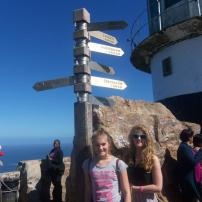 Penguin Island was HANDS DOWN THE CUTEST EXPERIENCE. To get to the most central beached area you had to walk all the way along this beautiful wooden boardwalk the lined the coastline. Honestly my first thought being here was why would there be penguins in Africa? trust me at the time when we went to South Africa I was a little confused and amused at there being penguins. 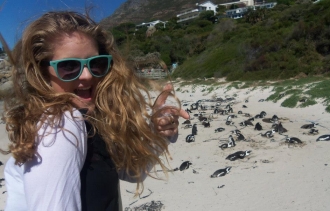 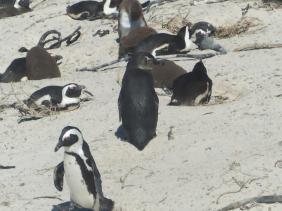 Then I remember just how cold the sea is and that South Africa is obviously, well, South. And near the Antarctic. Hence why the sea is also so cold. So its actually perfect for the little penguins really cause its warm as hell when they leave the water but cold as shit once they jump back in!  It was unusual seeing Penguins in the area but they were really cute, and seemed pretty happy lounging in the sun by all accounts!

P.S. If I tried to crop myself out a picture harder than the one above I may have bust a blood vessel in my brain. Alas I failed, and it is tragic. Enjoy.

Waterside Shopping mall was something that we visited maybe once or twice, There were plenty of shops and things to buy of course. Plenty of restaurants as well and there was ALWAYS some sort of entertainment going on around the outside areas and the marina parts! What I thought was pretty awesome was the large red man made out of coke cola boxes by the mall itself.

I imagine this was something done for the football that was held in South Africa, and the stadium was also really lovely although I didn’t go inside and Im not a massive football fan, form the outside its pretty presentable is you ask me!

One night we went for dinner in Waterside Mall and it was a seafood restaurant, I wish I remembered the name because It was amazing. Mr Sylvester Stallone was also dining in the same restaurant as we were that evening in another section which was pretty awesome too.

But what made the experience was my little sister trying to eat an entire plate of king prawns. She’s small but mighty that girl.

I’ll be writing about my experience at Robben Island on a second post as I feel its something that I can really touch on, I want to emphasise the importance of such a place and believe for that it deserves its own post.

Another quick point for you guys is that I’ve made a new Instagram just especially for this blog, so if you’d like to give it a follow then the @ is;